ZAMBIA! That’s what was on my calendar for the end of June.  My plan was to be back in Zambia with Chuck Madinger and a team from TWR to test the three pilot episodes of Holding Esther. For weeks our  team discussed it, planned it, and were on the verge of purchasing plane tickets. Then we got the call. Our partnering organization needed to reschedule.

I had to adjust my attitude a bit and trust that God’s purposes are better than my plans.

This closed door opened opened a window for me to take a quick trip to Washington, D.C. to meet Martha Cameron, who is on the board with Every Orphan’s Hope. 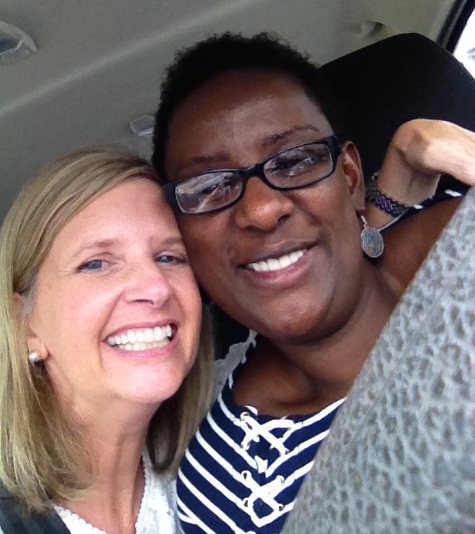 I made a new friend. But, more importantly, I was able to gain
Martha’s perspective on Holding Esther. I said to Martha,

“One of the directors with Every Orphan’s Hope, told me that Holding Esther has the potential to change orphan care in your country. What do you think about this?”

Here’s what she said,

“Holding Esther absolutely has the potential to change orphan care. It equips caregivers with practical tools. But, it also touches their hearts and helps them see the children the way God sees them.”

God’s purposes are better than my plans.

God’s purpose in closing this door was not only for me to connect with Martha and get her perspective on Holding Esther. It was also to increase the impact of our trip. Instead of a trip to test the three pilot episodes, we are now planning a trip to test the entire series.

That’s right. We received a grant that will cover the cost of producing the remaining five episodes as well as a round of doctoral level testing in Zambia. We go to production in September!

God’s purposes are better than my plans.

And I’m wondering, can you relate. Have you bumped up against a closed door in your life? Maybe, just maybe, this closed door is opening a window.

Many are the plans in a person’s heart, but it is the LORD’s purpose that prevails. Proverbs 19:21

This post is really the lead article for my monthly e-newsletter about the work I’m doing with RiverCross. The newsletter includes updates on RiverCross, Finley Family news, and what I’ll be doing in London in September.   If you’d like to get on that list, email me at cindyfinley@cindyfinley.com, and I’ll add you! Thanks!

After a full day of feeding thousands, Jesus walked down to the lakefront with his disciples. Their boat was waiting for them. Daylight was fading and clouds were skittering across the twilight sky.

It would have made sense for them to camp out until morning. But Jesus had bigger plans. They were already worn out from the day, but they did what Jesus said. Each man took his place while Jesus watched from the shore.

I see Peter taking charge, and then offering a hand to  Jesus as he stood solitary.

In my mind, I see Jesus say, “No thanks, Peter. You go on ahead. I need a bit of time to myself. I’ll catch up with you on the other side.”

This would have made no sense to Peter. There wasn’t another boat.  But he was tired. And he probably wasn’t too worried about Jesus at this point.

Jesus turned and walked away from the men as they pushed off. He went up on the mountain by himself to pray. Maybe to pick up where he’d left off earlier in the day, before he fed 5000.  Maybe to think about John and talk to his Father about it. Maybe to pray about what was next and how to handle the crowds.

But as he walked and prayed and had time by himself, the wind picked up. A storm was brewing.  The skittering clouds began to spit rain. Jesus saw it all. He saw them watching the weather, adjusting the sails, battening down.

As the clouds opened up and the torrent was unleashed, he watched. He watched as lighting split the sky and the wind began to howl through the rigging.  He saw the scene unfold as fear gripped his men. With all their might, they rowed. Jesus watched.  And he waited.

Nine hours, he waited.  And then, he came to them.

Why didn’t he come to them at the first hint of storm?  Why did he send them out there in the first place? Why did he watch them row?

Do you ever look at your life and ask God these questions?  Where are you, God? Why did you do this to me?  To my family? Don’t you see me struggling?

I think one of the hardest things for us to accept is that God often watches and waits. He doesn’t rescue right away. He lets us make “painful headway.” And sometimes he doesn’t rescue at all, not in the way we would like.

We want to get to the next scene now. We want to see Jesus coming to them on the water. To hear him say,

We want to see him call to Peter, and stretch out his hand when Peter shifts his eyes back to the wind and waves. We want to see  the storm die down and land on the other shore.  We want cause to worship and say, “Truly you are exactly who I thought you were.”

Can you trust him in the rowing?

He saw they were making headway painfully, for the wind was against them. Mark 6:48

Jesus got the word that John had been beheaded by Herod. John was dear to Jesus. They were cousins. But, even more than this, John had been the one who prepared the way for Jesus.  Even when people want to give John position, he said, “I am not the Christ. I’m not even worthy to tie his sandals.”

John was arrested. And while in prison, he had plenty of time to think. He wondered if he had missed it. Maybe Jesus wasn’t the Christ. So, he brought his doubts to Jesus.

John brought his doubts to Jesus. He sent a friend to Jesus with this message:

Are you the one who is to come, or shall we look for another? Matthew 11:3

Jesus sent word to John right away. “Tell John what is happening. The blind are receiving sight. The lame are walking. Lepers are being cleansed. The deaf are hearing. The dead are being raised. And the poor are receiving the good news. John, everything that you wanted to see happen, is happening.”

And as the messenger turned back toward the prison, Jesus said, ” Of all the men that have ever been born, none is greater than John the Baptist.”

And now Jesus has received word that John has been beheaded.

Jesus takes time to grieve. He gets in a boat, lands on a lonely shore, and spends some time by himself.

And I’m wondering if you need to take some time to grieve. Too often we just bury the pain. We put it in a neat package. We pretend like it’s not so bad. We go on with life and we don’t take the time to grieve.

If today is a day in which you’re experiencing a loss, would you take some time, like Jesus did, to grieve?

Now when Jesus heard this, he withdrew from there in a boat to a desolate place by himself. Matthew 14:13

Would you take just 2:25 and enjoy this beauty, this dignity with me?

Do you love this as much as I do?

I’m reading Job right now. This time around I’m less struck by the horrific losses that he experienced than I am by the sorry way his “friends” came around him.

As Job sat in silence, covered in ashes, grieving, and trying to make sense of it all … his friends pointed their theological fingers.  They looked for sin in Job’s life. And when they couldn’t find any, they dug their fingers into his wounds searching for sin. Their only explanation for Job’s loss, Job’s pain was hidden sin in his life.

They robbed him of his humanity. They buried his dignity. He would have been better off without them.

Jesus makes it clear that all the pain, the misfortune, the hard knocks in life … are not always related to sin. But, we’re quick to go there, aren’t we?  We’re quick to look for sin and heap clods of dirt on the hearts of the hurting.

Today, would you be on the lookout for someone who needs a  bit of humanity? You just might uncover treasures of dignity.

As (Jesus) passed by, he saw a man blind from birth. And his disciples asked him, “Rabbi, who sinned, this man or his parents, that he was born blind?” Jesus answered, “It was not that this man sinned, or his parents, but that the works of God might be displayed in him.